Your tax deductible gift can be made by clicking below.

The Nam Knights of America MC, Palm Beach County Chapter is a registered not for profit 501(c)(3)

This site is dedicated to the 2.7 million Americans who served during the Vietnam Era. The more than 58,000 who gave the ultimate sacrifice and to all those that still remain missing. Let us never forget!

The Nam Knights Motorcycle Club continues to grow and thrive today due to the extraordinary dedication of its members, their families and our benevolent supporters..

The Nam Knights of America Motorcycle Clubs are proud to support Rolling Thunder. The major function of Rolling Thunder®, Inc. is to publicize the POW-MIA issue: To educate the public that many American Prisoners of War were left behind after all previous wars and to help correct the past and to protect future Veterans from being left behind should they become Prisoners of War-Missing In Action. We are also committed to helping American Veterans from all wars. 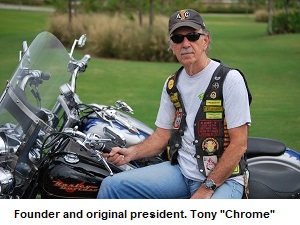 The original 8 founding members, Tony Schebell, Kent Grover, Willy Beale, Floyd Newsome, Dewey Morris, Jim Riggle, Mickey Giordano and Dennis Virostko founded the chapter back in 1994 after being part of the Orlando Chapter for about a year.

They would meet with them every month at the truck stop in Vero Beach at exit 60. Using the back room to conduct  meetings and carry out business.

After a year of that, the original members broke off and started the South Florida Chapter.  The chapter grew fast to about 53 members strong. The Nam Knights were featured by the West Palm Beach Bobcats arena football team at all the home games.

Today, the Palm Beach County Chapter of the Nam Knights of America is as strongs as ever and still continues to support Vettsville along with many other veteran and law enforcement charities.

In the summer of 1989 a small group of Harley-riding combat vets of the Viet Nam War, who were also police officers, banded together to form the Nam Knights.

Today, the Nam Knights of America Motorcycle Club has grown to 69 chapters in 16 states, Washington D.C. and two Canadian provinces, with hundreds of members made up of veteran's of all eras as well as law enforcement personnel plus a few special and dedicated "patriots."

As Jack has said: "The club was formed to recapture the brotherhood its founding members shared while serving in Southeast Asia, and to help other veterans of all wars who are unable to physically or financially help themselves."

"The Nam Knights Motorcycle Club continues to grow and thrive due to the extraordinary dedication of its members, their families and our benevolent supporters."